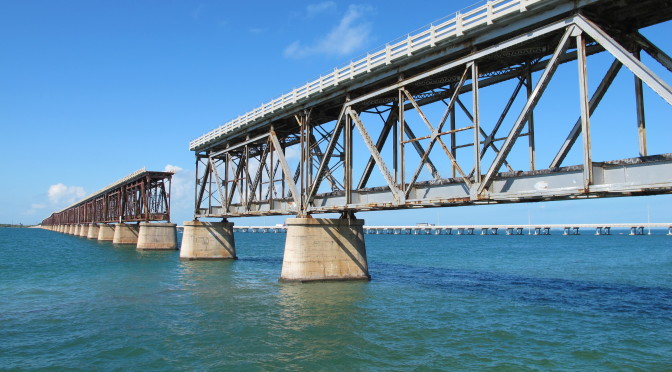 Since a few years my brother and I were talking about a trip to Florida. He’s never been to the US, and it was settled, that if he ever would travel to the States, it’d be with me.

It was clear that it’d be a challenge to travel together, and I confess, we have our times … not unexpected. But we manage and I really enjoy watching him being totally excited about all the things I – after many years of traveling through the US – take for granted.

We flew into Miami and stayed at a hotel close to the airport. For me it’s the most relaxing way to visit a city after a long flight. You just pick up the rental car at the airport, drive a few minutes and sleep in a nice, not too expensive hotel. On the next day take the free shuttle to the airport and public transportation downtown. A day pass for the Metrorail downtown Miami and the Metrobus to Miami Beach is $5.65, no stress driving, no stress finding a parking space.

We just had one day in Miami and spent most of that day at Miami Beach, Roland even went swimming.

On the second day we drove south to Key West. If you’ve ever been there or seen pictures, you know how beautiful the drive along the Florida Keys is. The Pelicans gliding over the surface of the ocean are such a majestic view. If it’s your first time it just takes your breath away. On the way back we made a short stop at the Bahia Honda State Park to go swimming in the Atlantic and the Gulf of Mexico. 😉 We were very lucky to not just see (probably) a white headed sea eagle but also a Manatee.

In Key West we took bikes to ride around. It’s a great way to see as much of the island as possible in one day, and really worth the $10 rent! And yes, on the first evening we joined the crowd at the sunset party point, but the one on the eastern side the next evening was even better and the people on the planks made a nice motive.

Next stop will be Everglades NP.